My Story - How I came to use Wicked Edge 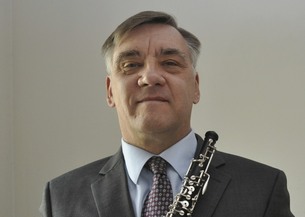 I started using Wicked Edge in 2011 out of desperation.  After using crock sticks fairly successfully for several years, for reasons I couldn't explain, the results were no longer satisfactory  It took a while to figure out how to get Wicked Edge to work with reed knives, but once I did - the results were superior, as good or better than for people that had mastered knife sharpening. The quality of my reeds improved dramatically.

For years I struggled with reed making, but really the issue was my knives not being sharp enough.

In 2011, after 33 years service, I retired from The U.S. Army Band, "Pershing's Own".  That November I had the opportunity to travel to Santa Fe, New Mexico, to visit with Clay Allison, inventor and owner of Wicked Edge.  I told him about the dramatic effect Wicked Edge had had on my career and that I was now retired. We discussed the possibility of me representing Wicked Edge to the Double Reed community. Clay had no idea about reed knives and was amazed to see how intense reed making is. In 2012 Wicked Edge named me Exclusive Representative to the Double Reed community.

Since 2012 I have had the opportunity to demonstrate the Wicked Edge Precision Knife Sharpener to oboists and bassoonists to in the United States and internationally. Everyone is amazed at how quickly and precisely Wicked Edge is able to sharpen knives. People are regularly shocked at how well this system restores older knives that otherwise seem unable to be sharpened in just minutes. I have had the privilege to demonstrate this system for members of the Philadelphia Orchestra, Pittsburgh, Cincinnati, National, San Francisco Symphonies, the New York Philharmonic and leading colleges and conservatories such as The Curtis Institute, Juilliard, Eastman, and the Cleveland Institute of Music among many others.

Having played professionally for years, I understand the pressures oboists are under to make reeds constantly.  Conductors and colleagues have no idea the nightmare that reed making can be.

This system has the capacity to dramatically change your oboe or bassoon playing.

Having a system that sharpens knives with amazing consistently provides a measure of stability in a profession that is otherwise so mercurial.