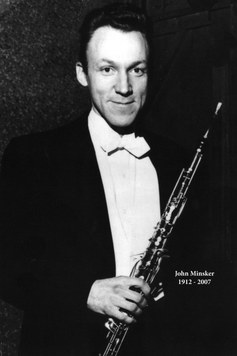 John Minsker was the legendary English Hornist of the Philadelphia Orchestra from 1936-1959.

He was the teacher of many of the famous oboists of the twentieth century including John Mack, Louis Rosenblatt, Al Genovese and my own teacher, Earnie Harrison.

A tireless advocate for the teaching and playing of his own teacher, Marcel Tabuteau, he was very modest about his own abilities as both a player and teacher, but his colleagues and students would not agree. Don Hefner, who was in the last class of Tabuteau at Curtis with Al Genovese, related a story where he took a lesson several days following Minsker's performance of the Roman Carnival Overture.  Tabuteau was visibly still moved at Minsker's eloquent performance. Earnie Harrison said that Minsker would warm up doing long tones pianissimo. His pure tone cut through the din of other musicians warming up. Minsker responded to this saying: "I don't think anyone ever told me that!"

I can honestly say I learned more about playing and artistry from Mr. Minsker than from anyone else.

We met in 1990 and visited once or twice a year until his passing in 2007.  I treasure those visits. One time when I was going to play for him his wife, Betty, asked if I minded her sitting in.  Of course I didn't mind.  Well, Mr. Minsker was not at all pleased and let into me.  After a few minutes she said, "I think I'm going to leave" and slid out of the room. I kind of wanted to follow her, but I sure learned a lot in that lesson.

Mrs. Minsker would take me out to dinner.  Minsker didn't like crowds and would never go.  She was a fascinating woman in her own right.  She and Minsker married following the passing of his first wife. She had worked as a welder during World War II and later became a school principal.

Below is an article I wrote for the Double Reed Journal honoring his memory.
Article: John Minsker Gentle Giant